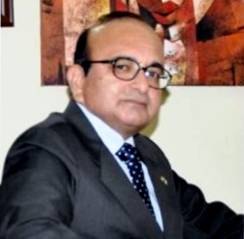 Former Ambassador of India to Algeria, Norway and Nigeria

Ambassador Mahesh Sachdev retired from Indian Foreign Service in October 2013. His 35-year diplomatic career included three Ambassadorial assignments spanning 11 years to Algeria, Norway and Nigeria – all major oil exporters. Nearly half of his diplomatic career was spent dealing with the Middle East. He is fluent in Arabic and knows some French.

Amb. Sachdev is currently the President of Eco-Diplomacy & Strategies, a consultancy in Delhi. He was Founder-President of the UAE-India Business Council and a Consultant to Jamia Millia Islamia University. He has authored two well received “Business Manuals” on Nigeria (Sept 2014; second edition in Oct. 2018) and the UAE (Sept 2016). He comments on strategic, economic and cross-cultural issues in media in India, Gulf and Africa.

Hydrocarbon sector and Middle East have been two major politico-economic foci of Amb Sachdev’s career. He studied Arabic in Damascus (1980-83) and was First Secretary (Political) in Saudi Arabia (1983-86). His 9 years in two stints at the Foreign Ministry Headquarters anchored his ME expertise: He served as Deputy Secretary/Director (1988-95) for Gulf countries and Joint Secretary of West Asia - North Africa (2002-03). In particular, he handled sensitive ties with Saudi Arabia and the GCC states. He was ambassador to Algeria and Nigeria – Africa’s prominent economies and markets – his tenures totalling 8 years saw surge in bilateral ties.

Amb. Sachdev’s eco-commercial felicity extends beyond hydrocarbons. Under his watch (2008-13), India’s exports to Nigeria tripled making India Nigeria’s largest trading partner with direct trade touched $17 bn – a record. India’s investments in Nigeria grew to over $11 bn, two third of them during his stint. Earlier as India’s Minister to the EU (Brussels; 1995-98), he successfully handled complex and far-reaching trade policy issues. As Ambassador to Norway, he persuaded NBIM, their Sovereign Wealth Fund, to begin investing in India.  These are now put at $9 bn. Indian exports of pharma and automobiles commenced during his term in Algeria. Few of his other successes were: acquisition of oil assets in (South) Sudan, negotiations with Algeria’s Sonatrach, ONGC-Norse Hydro/Statoil negotiations and OVL/OMEL/Sterling Blocks in Nigeria.

As an economic strategist and consultant for over five years, Amb Sachdev has selectively helped stakeholders to cut through the irrational ‘conventional wisdom’, identify lucrative opportunities, avoid pitfalls and design a win-win synergy.

Amb Sachdev studied at Rajghat Besant School at Varanasi, B.Sc.(Hons) at Meerut University (Topper & Best Graduate of 1973) and M.Sc.M.Phil. (Nuclear Physics) at the Indian Institute of Technology, Kanpur. He is a life member of Mensa Society. Despite multiple achievements, Amb. Mahesh Sachdev, 65, remains a self-made person rooted in ground reality. He lives in New Delhi with his wife and son.

We are a nonpartisan trust that works to create a strong and
open society through ethical leadership and constructive dialogues.